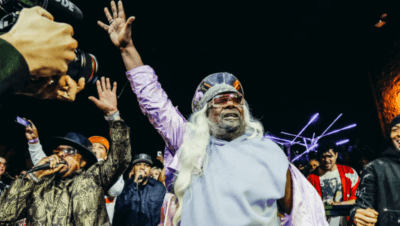 A whole lot of rhythm was goin’ down at Live House in Los Angeles on Thursday, May 9, at the “George Clinton and Parliament Funkadelic JammJam” presented by Jammcard. George Clinton, the man who invented P-funk, was in attendance to witness stellar roof-tearing performances by some of his best-known acolytes including Ice Cube, Anderson .Paak, CeeLo Green, Eddie Griffin, Battlecat plus members of the original Parliament Funkadelic. Clinton testified, “They had me crying like a bitch with tears of joy.”

At one point, Ice Cube jumped into the JammJam circle and performed “That New Funkadelic” with Flea, Eddie Griffin, George Clinton and the original Parliament Funkadelic all dancing and singing gang vocals. Anderson .Paak joined in and improvised over “One Nation Under a Groove” and then went over to the drum set and drum battled with the drummer influencer sensation Eric Moore. Some more of the best musicians in the world jumped in to play as well, including Stanley Randolph (Stevie Wonder’s drummer), Ari O’Neal (Beyoncé’s guitarist), Nisan Stewart (Missy Elliott, Jamie Foxx, 50 Cent’s drummer/producer/musical director), Jae Deal (Janet Jackson, Elton John’s arranger), Lynette Williams (Childish Gambino’s keyboardist) and Elmo Lovano (Jammcard’s founder & CEO).

Jammcard is the fast-growing music tech startup known to most as the Music Professionals Network and coined the “LinkedIn for musicians” by Forbes. The Los Angeles-based community expanded to Atlanta and Nashville earlier this year and just this week, won the Gold award for Best Mobile App in Social Media at the W3 Awards. The W3 Awards recognize digital excellence worldwide within the tech industry. Jammcard also recently announced the completion of a $1MM seed round from a variety of entertainment industry members and tech angel investors, including music legend Quincy Jones.

The JammJam is one of Jammcard’s many facets, as the app’s base purpose is to connect the music community by way of an invite-only social network for vetted pros. The app has been credited for assembling live bands for some of today’s biggest acts, such as Gwen Stefani, Zedd, Maren Morris, PARTYNEXTDOOR, Jason Derulo, and Grace VanderWaal, among many others. Previous JammJams include takeovers of Tower Records and Capitol Records, and has featured performances by Ty Dolla $ign, Robin Thicke, Judith Hill, Cory Henry, Kamasi Washington and many more.