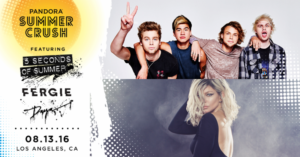 Pandora Summer Crush is back for the second year in a row at L.A. Live – the premiere live sports and entertainment destination located in the heart of downtown Los Angeles— to bring fans one of the top music events of the season, whether they’re at the event (exclusive to Pandora listeners) or tuning in from their earbuds at home. Listeners can RSVP here. Launching July 25, the Pandora Summer Crush station will feature an exclusive mixtape curated by the performers, and then grant listeners exclusive access to the livestreamed concert on August 13.

“We’re thrilled about this year’s bill. 5 Seconds of Summer’s songs have been played more than a half billion times on Pandora, and their Summer Crush performance comes on top of the partnership we’ve had supporting their tour,” said Lars Murray, Senior Vice President, Music Makers Group, Pandora. “Fergie needs no introduction, and we’re looking forward to hearing her new material live. As for Daya, between her solo tracks and her collaborations, she was heard over 10 million times this week on Pandora. She’s one of the fastest developing Pop artists on the platform right now – and a great indie label story.”

The event advances Pandora’s focus on helping artists grow their careers. This began with the launch of AMP in October 2014 and continued with the rollout of Artist Audio Messages in February 2015 and AMPcast in March 2016. The 2015 acquisitions of Next Big Sound and Ticketfly have helped to deepen this partnership by providing even more data to artists while making it easier to connect with fans through live events.