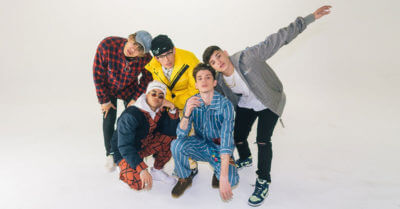 PRETTYMUCH will kick off their summer North American headlining outing, the FOMO Tour on July 11thand have announced that one of the most influential rising stars of Generation Z, Mackenzie Ziegler, will be joining the group as the official support act. The tour follows the group’s highly successful sold-out headline Funktion Tour last fall and their slot as main support on Grammy nominee Khalid’s Roxy Tour last summer.

Produced by Live Nation, the 23-city trek will kick off July 11th in Dallas, TX and make stops in New York City, Boston, Chicago, Los Angeles and more before wrapping August 16th in Vancouver, BC. Tickets are on sale now at LiveNation.com.

PRETTYMUCH is Austin Porter, Brandon Arreaga, Edwin Honoret, Nick Mara and Zion Kuwonu. They were coined as one of Artists to Watch by Rolling Stone, MTV, Los Angeles Times with Billboard also honoring them in their “21 Under 21” list. They were nominated for Best Boy Band at the 2018 iHeartRadio Music Awards and Best PUSH Artist of the Year at the 2018 MTV’s VMA. The group recently released their catchy upbeat track “Phases.”

As an award-winning dancer, singer-songwriter, actress and author, Mackenzie continues to establish herself as a solo artist and voice of her generation at just 14 years old. She released her single “Wonderful,” written for her by Grammy-winning singer/songwriter Sia in September 2018, and her debut album, Phases, released November 20, 2018. That same year, Mackenzie completed on the premiere season of ABC’s “Dancing with the Stars: Juniors” and released her first book “Kenzie’s Rules for Life.” With a massive social media presence of over 25 million followers across several platforms, her impact on the entertainment industry is undeniable.