All Radio News
Home Radio News The Biggest Hip Hop Event of the Year Comes to the Tri-State... 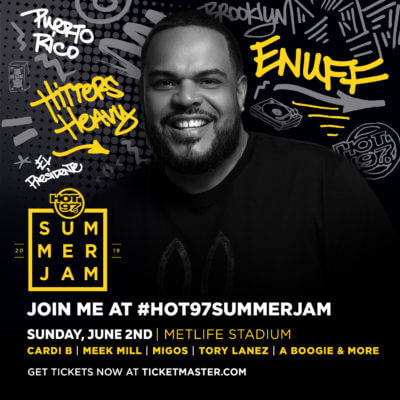 In just one month, some of the biggest names in music join the most iconic radio station in Hip Hop for the hottest concert of the year: HOT 97 Summer Jam. Produced by HOT 97 WQHT-FM, #1 for Hip Hop, this year’s Summer Jam performers include Grammy Award-winning artist and Bronx native, Cardi B, rapper, songwriter, and activist, Meek Mill, two-time platinum selling Hip Hop group, Migos, singer-producer, Tory Lanez, XXL Magazine Freshmen alum, A Boogie, and more. Taking place on Sunday, June 2, 2019, at MetLife Stadium in East Rutherford, New Jersey, Summer Jam is the event of the year where historic moments are made and Hip Hop music & culture are celebrated. Additional performers include Rich the Kid, Funk Flex & the Heavy Hitters, Davido, Casanova, Melii, City Girls, Megan Thee Stallion, and Kash Doll, as well as numerous surprise guests, a staple element of Summer Jam. Tickets are on sale now at hot97.com/summerjam and all Ticketmaster platforms.

Trippie Redd kicks off the Festival Stage at 4:00 p.m. alongside City Girls, Blueface, Melii, Nicole Bus, and G4 Boyz. The Festival Stage is the premier platform emerging artists perform on during the Festival Village experience before the Stadium show. For the second year, emerging artists have a chance to perform on the Festival Stage by submitting their music via Facebook Messenger in the WHO’S NEXT Destination Summer Jam contest. The finalist will be chosen at the end of May and will win the opportunity to perform in front of thousands of Hip Hop’s biggest fans at Summer Jam. For more information on the contest visit hot97.com/whosnext.

MetLife Stadium parking lots open at 2:00 p.m. The only way into the parking lots and Festival Village is with your Summer Jam ticket. For more information on Summer Jam, including a chance to win tickets to the concert at upcoming HOT 97 events across the tri-state, visit hot97.com/summerjam.