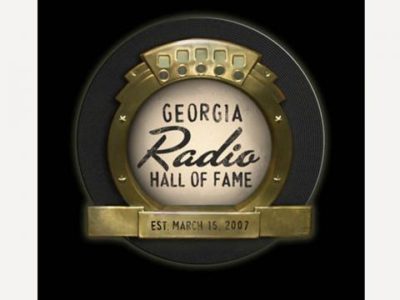 Bert Parks – While many will know that his career included a 24 year position as the host of the Miss America Pageant and the singer of the pageant’s trademark song “There She Is, Miss America” they may not know that both his singing talent and emcee work began at age 16 in Atlanta, Georgia. A singing contest winner at 16, got him noticed and work at WGST as both a singer and announcer. He kept this work until his graduation from Marist Preparatory School. He would move to New York at age 17 to work at CBS radio as an announcer for numerous popular shows of the day and travelled with the Big Bands of Tommy Dorsey and Glenn Miller serving as an emcee for these shows, which were often broadcast. Bert Parks would go on to also host game shows on radio and moved with those to Television in the late 1940’s. Bert Parks many talents and long career are well deserving of induction in the Georgia Radio Hall of Fame.

Paul Burke Johnson, Sr. – Atlanta radio listeners remember the “Burke Johnson Show” and the phrase “A good tempo, with a great flow”. This former Army Veteran found a home and an impressive radio career in Atlanta, Georgia. Beginning at America’s first Black owned radio station, WERD he started a radio career that was legendary. His work caught the ear of WAOK owner Zenas “Daddy’ Sears who hired him to bring the Burke Johnson Show to the station for many years bringing the music of the 1960’s to the listeners of his show. Burke Johnson also brought in studio interviews to his audience with luminaries Martin Luther King, Jr., Sidney Portier, Ray Charles, and Count Basie. Famous stars not only visited with Burke Johnson on-air but also at his home. The Isley Brothers, James Brown and Moms Mabley enjoyed his hospitality. Burke Johnson became the Program Director of WAOK in the 1970’s and left in the mid-70s to work for Motown promoting artists for the label. In the 1980’s Burke Johnson hosted “Inspirations Across America”, the first Black syndicated contemporary Gospel program on the air in the United States. His service to our country and the radio industry is certainly deserving of recognition and honor by the Georgia Radio Hall of Fame.

Sean Demery -Sean’s career began in his college days in 1976 in Mission Viejo, California with moves to stations KIOY in Fresno, California, where he took his air name of Sean Demery from the Fresno phone book and used throughout his successful and inspirational career. His Music Director talent helped that station to number one in the ratings. He also worked at stations in San Diego, Salt Lake City, San Antonio and then to Atlanta in 1989 to WAPW better known as Power 99. In 1991 Power 99 became 99X and Sean positioned the station musically until 2000. He returned to the station to join Leslie Fram as a co-host of the morning show in 2006 for a year. He then returned to the west working at stations and consulting until his death from complications from a stroke. He impacted Atlanta radio in a big way by helping create the legendary sound and brand of 99X.

Bill Duncan – An Atlantan born at Crawford Long Hospital was known by listeners from his work at WSB-FM, WPLO, WFOM, Y-106, WCNN, and to listeners in Douglas, Georgia from his work at WDMG. He also was a talent working at WAPE “The Big Ape” station in Jacksonville, Florida. A great radio personality and production talent who kept listeners entertained for many years he also used the air name of Roger Clark. His talents were not just in radio, he was also known for his talent for playing the guitar.

Atlanta radio listeners will also be pleased to hear that these Atlanta radio personalities and professionals have been nominated for Career Achievement Award induction:

Around the state of Georgia

The Career Achievement nominees are voted upon by the membership of the Georgia Radio Hall of Fame. Voting for these awards will begin on July 1st by the membership. Final results of the voting and announcement of those who will be inducted will be announced at the annual Awards Dinner on October 26, 2019. For information on how to join the organization and vote please visit www.grhof.com.

IHEARTMEDIA CHICAGO’S 93.9 LITE FM KICKS OFF THE HOLIDAY SEASON WITH...

AUDACY ADDS IAN CAMFIELD TO MORNINGS ON 99.5 THE MOUNTAIN IN...